Never one to be satisfied with the thousands of designed-for-crochet patterns already available to me, I recently found myself admiring a knitted sweater pattern, and wondering ‘can you change a knitting pattern to crochet?’ Or more to the point, what are the odds of coming horribly unstuck half way in? So I went in search of feedback from pioneering crafters who have tried it before me, and now I want to use this blog post to gather everything I learned in one place, and share it with you too!

Knitting patterns can’t be used stitch-for-stitch as crochet patterns, but they can be used as inspiration for shapes, colors, textures. Translating a design intended for one needlecraft into use for another takes a bit of patience, skill, and trial and error.

Can you change a knitting pattern to crochet?

So, it generally wiser to use knitting patterns for knitting, and crochet patterns for crochet. On this page you can see how a knitting and crochet pattern for the same project (the Flock tote bag) produce different results. The pattern is repeated 2.5 times across the front of the knit version, and only 1.5 times on the front of the crochet version, even though they are the same size. The crochet version will also cost you 50% more in materials! This company understands that to produce a similar item in either knit or crochet, requires two different patterns.

Which knitting patterns lend themselves to being made in crochet?

In short, ones which don’t involve counting stitches! Such as

And finally, almost anything made out of patchwork – when Harry Styles went viral wearing a patchwork knit jumper in 2020, crochet interpretations of it sprang up all over social media.

These items work because they are all assembled from flat shapes. Rather than converting a knitting pattern stitch-for-stitch, you could make a swatch of crochet in your chosen yarn, and then use the dimensions of the swatch to calculate the number of crochet stitches to make the same sized shapes.

On the other hand, it’s best to work the following items in the technique the instructions were intended for:

These all rely on increasing and decreasing the number of stitches in each row to achieve a properly fitting three-dimensional piece.

Stress-free ways to be inspired by knitting patterns

Just because you prefer a hook to needles doesn’t mean you can’t be inspired by patterns created for knitters though. Here’s how to take the best bits and make them your own:

If you do really want to challenge yourself to work a knitting pattern in crochet, here are the tools you will need to get started:

Using the same size of hook with your yarn as the knitting-needles size, will not produce the same gauge on your swatch. You will probably need to make several gauge swatches before you figure out what the right hook and stitch combo are, to get the effect you want. Remember that crochet stitches are taller than knit stitches. So you might have to reduce the number of stitches in your foundation chain by 30%, and the number of rows by 40%, for example.

As you begin to crochet, take copious notes on what you are doing – what is working, what isn’t, what you did there, in that spot, because guaranteed, if you put the project down for a few days, you will not remember exactly what all the steps were. Some pattern makers video themselves working so they can refer back to what they did.

Can a knitting pattern be converted into crochet – summary

Knitting patterns can’t be used stitch for stitch to recreate the same item in crochet. They are different techniques, and I’ve finally come to the realization that they should be celebrated as such! With a little experience and experimentation though, you can learn to make crochet equivalents of knitting patterns that you have seen. If you’ve been trying it, please let us know how you get on in the comments box! 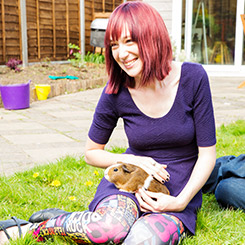 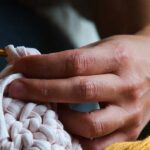 You might have a stash left over from a previous … END_OF_DOCUMENT_TOKEN_TO_BE_REPLACED